Today, on June 29, the Verkhovna Rada’s deputies by 318 votes supported the draft law on the fundamentals of national resistance in the first reading. At this time, veterans of the Russian-Ukrainian war and volunteers went to the Verkhovna Rada to hold the rally “Veterans support national resistance. Vote for the draft law № 5557”. The Ukrainian Security and Cooperation Center organized the event.

During the event, it was stressed that passing the draft law № 5557 is a single way to strengthen the state as soon as possible in the face of the growing Russian threat from Russia’s territory, the occupied Crimea, ORDLO, Belarus, Moldovan Transnistria, Black and Azov Seas. 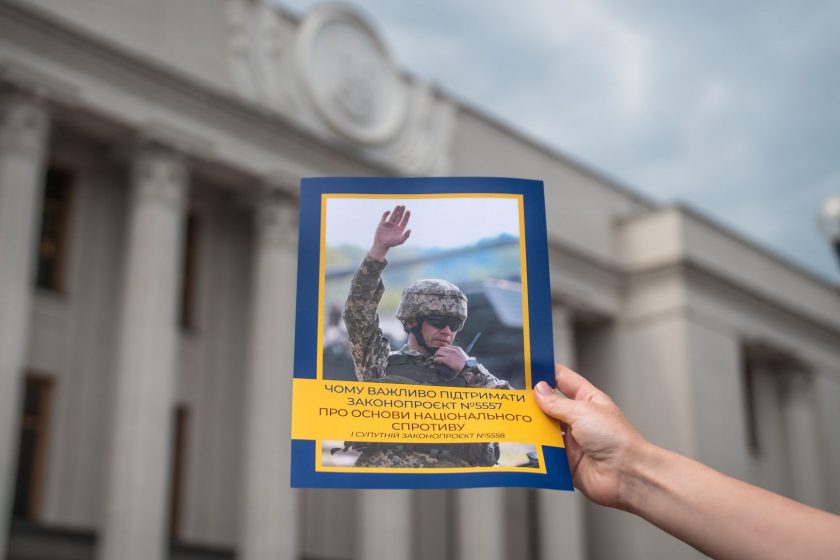 Head of the Ukrainian Security and Cooperation Center Serhii Kuzan notes that the draft law on the fundamentals of national resistance was prepared based on a study of NATO member states’ experience in organizing comprehensive defense, including territorial defense, resistance movement, and training citizens to defend their country.
“By changing its approach to defense, Ukraine is bringing it in line with existing Alliance practices. It is important that law enforcement officers of all types of troops, representatives of veterans’ organizations, and experts worked on the draft law. It is a joint development, and unity is a priority when we speak about national security and defense”, – Mr. Kuzan stressed.

The participants of the rally supported the change of the approach to national security in Ukraine and the need to implement the concept of comprehensive defense in practice, which was enshrined in the military security strategy.
“Military servicemen understand very well the importance of passing the bill on national resistance. I know those people who worked on the bill, I also shared my vision and they translated it into the legislative dimension. Officers, commanders, colonels, and generals worked on it – those people really know what the country’s defense is. We urgently need to pass the bill so that by 2022 we are sufficiently prepared for aggression from our nearest neighbor”, – Commander of the 24th separate assault battalion “Aidar” Yevhen Ptashnyk stated during the rally.
The representative of the volunteer community Dmytro Zhmailo noticed during the rally that the draft law № 5557 plays a key role in strengthening the state’s defense capabilities.

“The number of the Armed Forces of Ukraine, which is supposed to protect territorial integrity, is limited. No country in the world has the financial and economic capacity to maintain a large number of regular military units or divisions in each of its regions. Given the situation in which Ukraine finds itself, we must be ready to quickly counter and repel aggression from any direction”, – Mr. Zhmailo pointed out.

The participants of the rally supported the need to promptly pass the draft law 5557, which the President of Ukraine submitted to the Verkhovna Rada as an urgent one, given the threat from the Russian Federation. The Kremlin recently announced its intention to form about 20 new units in the Western Military District of the Russian Federation, which is the clearest evidence that the threat of a large-scale Russian invasion of Ukrainian territory is only intensifying.