The Russian authorities, which have always used history as a tool not only for propaganda and fakes but also for hybrid aggression, decided to “bury” some of the historical facts concerning the outbreak of the Second World War and the role of the USSR.

In his comment to the USCC, chief of Ukraine’s military intelligence Kyrylo Budanov noted that although for the whole world the Second World War ended in September 1945, it seems that for the Kremlin it is ongoing to this day and serves as an inexhaustible source of Russian propaganda, manipulations, and fakes. Moreover, primarily for their own population, which is brought up on the myths of the “Patriotic War” as a “people-liberator”.

On June 9, the lower chamber of the Russian parliament passed in third, final reading the draft law № 1166218-7 amending the Federal Law “On Immortalizing the Soviet People’s Victory in the Great Patriotic War of 1941-1945”. On July 1, it was signed by the President of the Russian Federation. The law proposes to ban the public denial of the “decisive role of the Soviet people in the defeat of Nazi Germany or the humanitarian mission of the USSR in the liberation of the countries of Europe”.

The ban will apply to public speeches, works on public display, as well as the media and the Internet.
In particular, the explanatory note to the bill states that its purpose is to “establish a ban on identifying the purpose, decisions, and actions of the USSR leadership, command, USSR servicemen with the goals, decisions and actions of Nazi Germany, command, Nazi Germany and Axis troops, which were established by the verdict of the international military tribunal for the trial and punishment of major war criminals of the European Axis countries (Nuremberg tribunal), as well as denying the crucial role of the Soviet people in the defeat of Nazi Germany or the humanitarian mission of the USSR in the liberation of the countries of Europe”.

What is the Kremlin trying to ban?

On August 23, 1939, Germany and the Soviet Union signed the Molotov-Ribbentrop Pact, a non-aggression pact. In a secret annex to the agreement, Moscow and Berlin agreed on the division of spheres of influence in Eastern Europe. A week after the document was signed, the Second World War broke off. On September 1, 1939, Germany attacked Poland from the west, and on September 17, the Red Army entered Poland from the east. On September 23, 1939, a joint parade of the Wehrmacht and the Red Army as allies took place in Brest (now Belarus).

These historical facts have always been very inconvenient for both the USSR and its successor, Russia, because the Second World War, or rather its chosen part, is the basis of the “Ruskiy mir” ideology.

A chosen part, because for Russia and its satellites, the war did not begin on September 1, 1939, but on June 22, 1941, actually from the date when the non-aggression treaty was breached by Germany, and was called the “Great Patriotic War”.

However, the law passed on June 9 is completely in line with the narratives of modern Russia, for which the USSR is the “liberator” of the enslaved peoples and the victorious country. At the same time, for some reason it is forgotten that 62 states took part in the war, the hostilities took place on three continents, in the waters of four oceans, and the victory itself was gained through the titanic and coordinated efforts of all allies of the Anti-Hitler coalition.

Why are these definitions and interpretations so important to the Kremlin? Because what the Kremlin calls “liberation” was actually an occupation of independent states.
After the partition of Poland, Western Ukraine fell under the new Soviet occupation. From 1939 to 1941, about 100 000 people (mostly Poles, Jews, and members of Ukrainian patriotic organizations) were deported from here.

On November 30, 1939, Soviet troops (about half a million people) invaded Finland, marking the beginning of the so-called Winter War. And within a year the occupation of the Baltic countries was unleashed.

On June 14, 1940, the USSR issued an ultimatum to Lithuania demanding a change of government and the opening of the border. On June 15, the Red Army entered the republic, and on June 17, Latvia and Estonia suffered a similar fate.
In 1941, a large number of the population of these countries, including women and children, were deported. In particular, on the night of June 13-14, about 15,5 thousand Latvians – including 2,4 thousand children under the age of 10 – were arrested without a court decision and deported to remote areas of the USSR.

34 000 men, women, and children (often whole families) were also deported from Lithuania and 10 000 from Estonia.

That is why the period from June 22, 1941, (violation of the non-aggression pact by Germany) to May 9, 1945 (Victory Day over Germany) is important for Soviet and modern Russian propaganda. In the former Soviet countries, the date of the Victory is celebrated on May 9, not the 8th, as in the rest of the world, due to that when the Instrument of Surrender was being signed, the 9th had already arrived in Moscow.

For the modern Russian government, which has adopted all the myths of Soviet propaganda and for which the collapse of the USSR is “the greatest catastrophe of the XX century” the issue of participation and role of the USSR in the Second World War is almost sacred. After all, it is based on the myths of the “victorious people”, “the chosen people”, “the people who destroyed fascism all alone” (in Soviet-Russian propaganda, Nazism was replaced by fascism):
“We will always remember that this great feat was done exactly by the Soviet people. In the toughest times of the war, in the decisive battles, the result of the struggle against fascism was determined, our people were alone”, – Putin said in a speech of May 9, 2021.

And all the historical facts and statements in the European Parliament about the equal role of Stalin and Hitler in the war are rejected by the President of the Russian Federation as “utter nonsense” by people “who can not read or write”.

Whole generations of Russian children and children living in Russian-occupied territories are being brought up on the topics of the “Patriotic War” and the “Great Victory” of the Soviet Union.

The scale can be imagined only by taking into account the activities of the All-Russia “Young Army” National Military Patriotic Social Movement Association, funded by the Russian government through the Russian Ministry of Defense and brought up on the ideas of Russian propaganda. The “Young Army” branches have been established not only throughout Russia, but also in the occupied parts of Georgia, Ukraine (Donetsk, Luhansk regions, the Crimea), and Moldova. According to information from the website, the number of young soldiers is currently 808 thousand.

Propaganda penetration has reached such a level that young parents are happy to dress their preschoolers in Red Army uniforms and make fake tanks out of strollers. 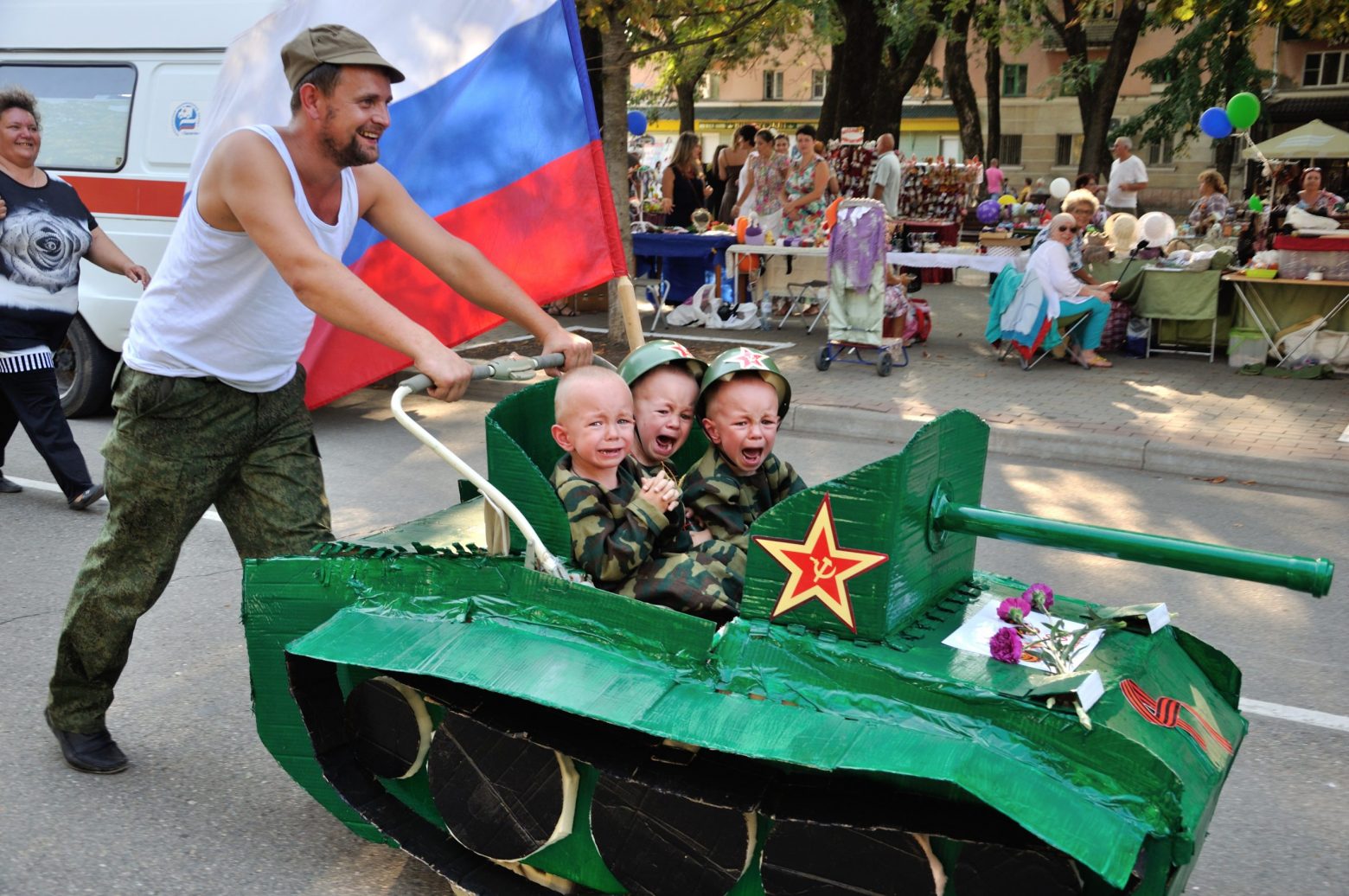 All these phenomena have gained such momentum, that even in Russia they have become known as victory frenzy (“pobedobesie” – containing Russian word “bes”, which means “demon”).

Also, according to our own sources, every May 9, employees of Russian state-owned enterprises are required to wear so-called “St. George ribbons”, which, according to Kremlin propagandists, should embody victory in the war (1941-1945) in Russia and satellite countries. This ribbon actually became a sign of commitment to the Kremlin, especially outside Russia.

In the photo: Russian collaborators and the Russian military in the East of Ukraine: 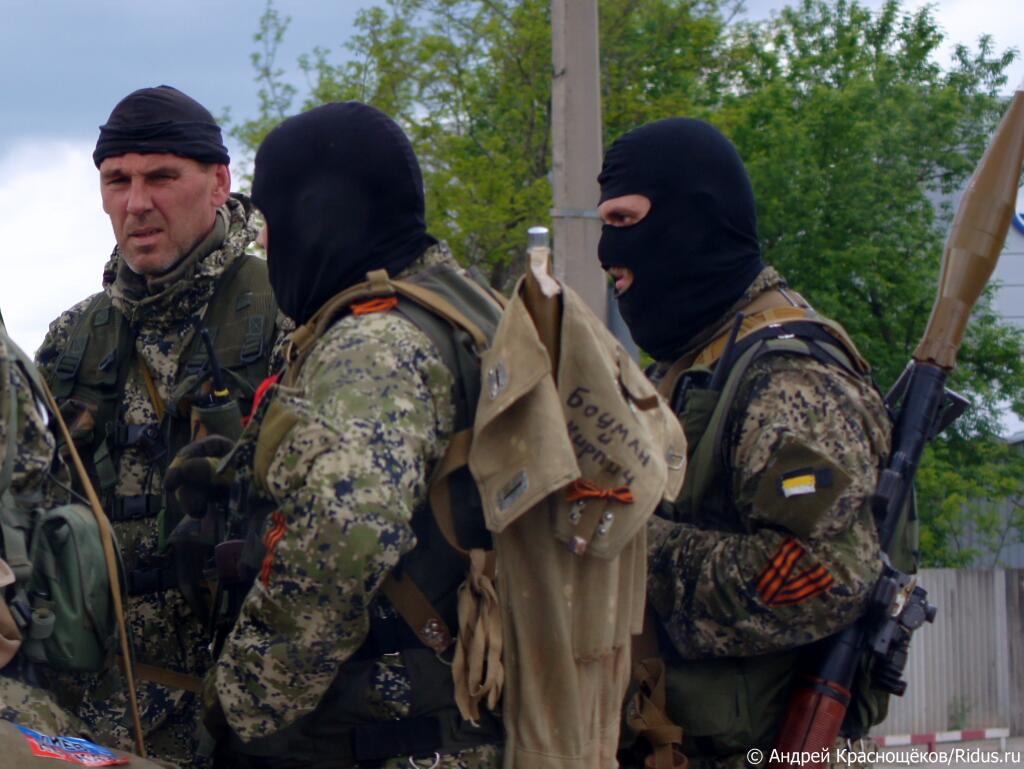 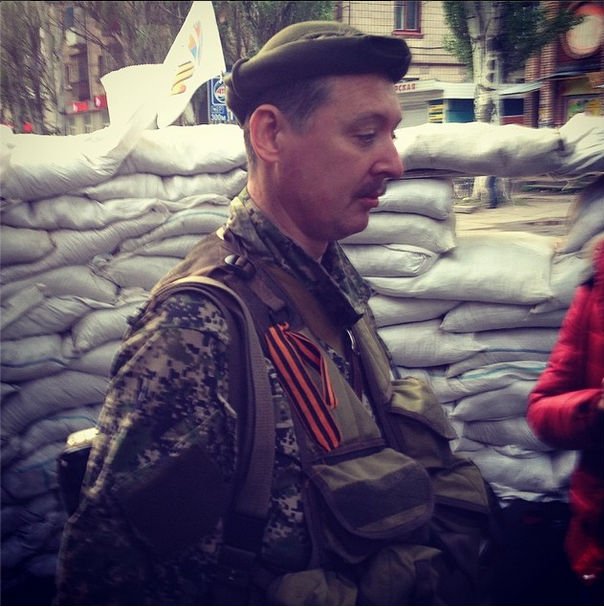 In a second photo – former FSB colonel Igor Girkin (Strelkov), the so-called Minister of Defense of the “DNR”. He is currently one of the accused in the case of shooting down the Malaysian Boeing MH17 in July 2014.

This level of propaganda around the Russian interpretation of the Second World War serves not only as a unifying factor for the “Ruskiy mir” but also as a tool for stigmatization and demonizing countries hostile to the current Russian powers.

In particular, it was by fighting “fascism” in Ukraine that Russian propaganda motivated Crimean residents to take part in anti-Ukrainian protests in March 2014 in Sevastopol.

It also motivated Russians to volunteer for the war in Ukraine to liberate themselves from the “fascists and Nazis” with whom it identified the regular Ukrainian army and the official leadership of Ukraine.

“The Main Department of Intelligence of the Ministry of Defense of Ukraine systematically monitors the actions of Russia’s top leadership, including the hybrid methods that Russia applies to whitewash its own history and the history of its predecessor state – the USSR. This narrative not only helps the Russian Federation divide the world into friends or foes but also motivates and legitimizes Russian armed aggression, which, as in the Soviet Union, is presented as “liberation” or the struggle against “fascism”, – Kyrylo Budanov stated.